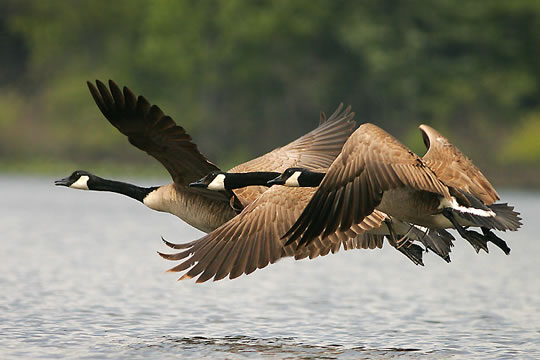 When I first crept on those geese there were 8 of them there, along with three black ducks,piece a cake. Problem was they were on one side and I was on the other. Luckily, the wind was in my favor, so I started to creep around the gully to get close enough to get a shot at them .When I got to where they were, I crept out to the side of the gully, NO GEESE. So I moved carefully closer to the gully and there they were right where I had just left only half an hour before, so I started creeping back to where I had been.When I got there the 3 ducks were right in front of me , but the geese had moved farther down the shore. I could have taken all 3 of the ducks , but I had goose fever.Some of the geese were on the bank and more in the water, but out of range.I waited patiently and finally they began to move up along the shore and I knew they would pass right in front of me. There was a big tree right in front of me that I was using for cover as they passed behind the tree I thought to myself when they come out on the other side I'll try to line a couple of them up and take the shot. They didn't come out from behind the tree, so I carefully changed my position to see what was going on, and sure enough they were heading strait across the gully to the other side. All this time the 3 ducks had stayed right in front of me and numerous times I could have taken all 3 with one shot, but again I had goose fever.After waiting for about another half hour the ducks decided to join the geese on the other side of the gully. I could still see the geese on the other side some in the water and some on the bank, but the ducks had vanished into the grass.After about another 20 minutes or so the geese began to move again apparently down the shore on the other side, then I noticed the white on their breasts and with the help of my binoculars I could see that they were heading strait at me.They came right in line with the tree and then moved slightly down the shore to my left and into a little nook and began to fee well within range.I was still hiding in a tangle so I had to position myself to get a shot, however, the 3 ducks were still somewhere in the grass and I had to make sure they didn't see me,if they went to wing they would surely spook the geese and I'd get no shot at all.  AT LAST   I had gotten myself into position to take the shot.I waited and finally 3 of them came together in a line and with one of my own hand loaded shells loaded with 1oz of BB steel shot with a muzzle volocity of 1700 fps. and a muzzle energy of 38 ft/lbs per pellet, I pulled the trigger. 2 of them stayed on the water and the rest went to wing.I dropped 2 more of them as they flew away, than I noticed that one of the three that I had fired at with the first shot had fallen out in the gully.So I dropped another shell into the receiver of my winchester model 1300 12 ga,speed pump and closed the action,took aim and at about 50 yds. finished him off. The other 2 were still alive and out of range ,so I started off around the gully as they swam down the other side toward the run-out , I knew that if they got to the river I'd loose them.When they realized that I  would get to the run-out before them they began to swim back up the shore again but they were staying close to shore.So with an empty gun and a shell in my hand I ran up the shore after them as fast as I could I figured if they stayed close to shore I would get them. As I ran they began to move off shore one was a little farther along the shore than the other so when I got broad side to the first one I dropped another shell into the receiver[ this time another hand loaded shell loaded with 7/8 oz of # 3 steel shot with a muzzle volocity of 1725fps. and a muzzle energy of just over 18 ft/lbs per pellet] took aim at his head and at about 50 yds. fired .Death was instant, then pulling another shell out of my gun belt as I ran I came broad side to the second goose and dropped in the shell aimed at his head and again at about 50 yds. killed him stone dead.When I saw 3 Canada geese floating on the water I couldn't believe my eyes now there were 5. Can you imagine how it feels to see a site like that 5 Canada geese floating dead on the water.A day I' ll never forget Oct.19/ 2009.As for the 3 black ducks AH ! WHAT DUCKS.
Albert 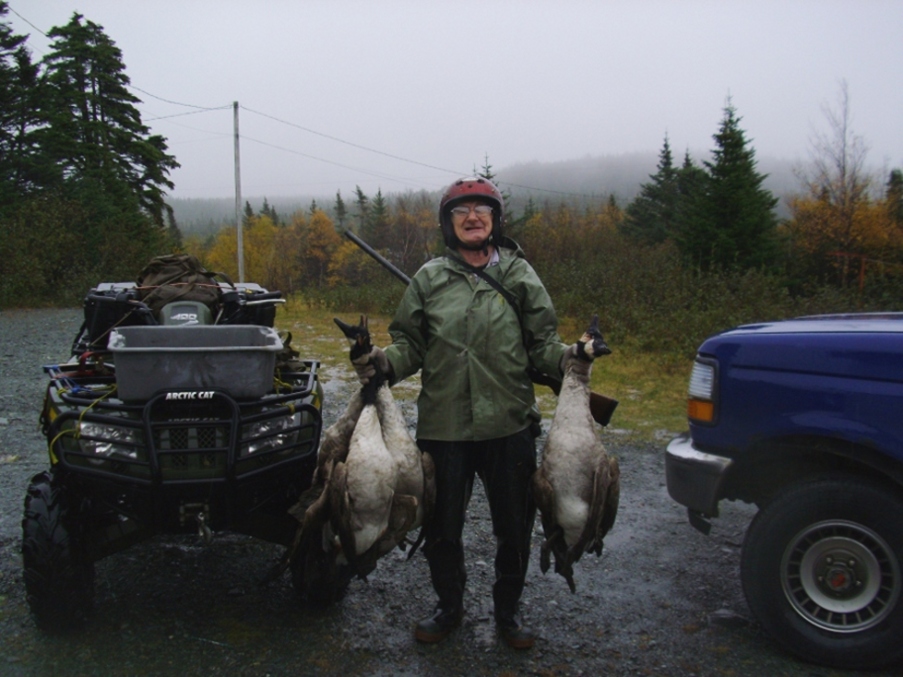 Replies to This Discussion

Permalink Reply by Peter Emberley on July 28, 2010 at 9:26pm
Very nice story. Must have been a very exciting day. I don't think you will ever forget that day.

Permalink Reply by Stefan Davis on July 29, 2010 at 1:17pm
That's pretty intense, Albert. All that crawling around really paid off! haha. Great story!

Permalink Reply by Craig Delahunty on September 13, 2010 at 11:32am
Great story Albert....I'll bet your heart was going a mile a minute when you first pulled the trigger.