Ed Smith was born in St. John’s, Newfoundland in 1978. His interest in nature began as a young boy camping and fishing with his family. This is where Smith’s love and passion for the outdoors came from. Ed’s mother remembers when he used to go out fishing before the sun came up and would quit just in time to go to bed. Smith’s interest in hunting began around the age of 10 when he was invited to join his stepfather and uncles on their annual moose hunting expeditions. At age 16, Ed was introduced to duck hunting. From that very first trip, ducks and geese have been his soul passion. Ed is an experienced outdoorsman, whose knowledgeable base of information and experience has brought about the provinces first Social network for outdoor enthusiasts for the province. He has hunted, fished, and explored much of the Island, and looks forward to the chance to hunt and fish in Labrador. Throughout his hunting and fishing life, Ed has continued to try and impart his knowledge and experiences with all. But, his best memories have come from others sharing their knowledge to him. 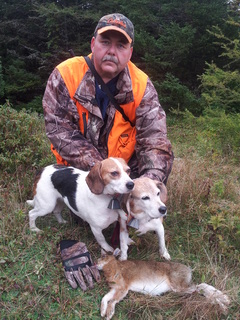 Peter Emberley was born in Come by chance,Newfoundland in 1969. Peter started his outdoor pursuits at a young age, fishing and laying slips with his father and Uncle Joe. It was his Uncle Joe that truly inspired his love for the outdoors. In 1984, his Father built a cabin in Davis Cove, there his father and uncle Joe kindled the spark that would lead to a life long pursuit of the outdoors for Peter. Peter applied for and recieved his first Fac in 1985. With that he purchased his first firearm, a 2200 Winchester pump action shotgun. Peter has hunted many species here on the Island, but his passion truly lies with Small game. Mr. Emberley has dedicated his life to his outdoor pursuits and has fostered that passion in his son, Peter Emberley Jr. Sparking a new generation of outdoor enthusiast. Peter brings his passion, dedication, knowledge, and experience to Totally Outdoors NL.

Rich was born in St. John’s, Newfoundland Labrador but at a very young age moved to Grand Falls-Windsor. When it comes to hunting and fishing, he has been doing so since he was able to carry a fishing rod and old enough to legally hunt with a rifle/shotgun. Rich hunts moose, caribou, black bear and small game but waterfowl hunting is his passion. There is nothing like the sound of whistling wings and the sight of ducks/geese tucking their wings and preparing to land in the decoy spread. Besides being an avid outdoorsman, some of Rich’s qualifications include being a large & small bore range safety officer with the Canadian Military and a licensed guide in NL. Rich believes as hunters, we must practice good hunting ethics; sportsmanship and moral conduct must set the example. Be safe and prepared on your hunting adventures!

Born and raised in New Harbour, my dad took me hunting when I was very young. Back then, snaring rabbits and partridge hunting were the things to do. Today I hunt mostly ducks and geese with my Drahthaar, "Chase." But, I always find some time to shoot a few partridge and rabbits.( got to love the versatility of these dogs)! But, by far my favorite things to hunt are divers,particularly Goldeneyes.

I started reloading back in the mid 70s. At the time I was using a Canadian made shell named " IMPERIAL" ,which were pretty good early on, but for some reason the quality of the shells went down hill . I later heard that the company was going out of business and that the employees didn't care what they put in the shell, they were crippling birds and that just turned me off.I began reloading my own and that solved the problem. " THEN CAME STEEL " same problem all over again.
At the time very little was known about steel as a shotshell pellet , even the experts didn't know much about it, and during the change-over there were to many cripples for my liking and I decided to give up waterfowl hunting and turned to reloading .410 shells for rabbits. I sent away to Gameal for a { MEC. 600 Jr.mark 5 } with dyes for the .410 bore shotgun. When it arrived there was a reloading guide included from Alliant Powder with a section specific to the reloading of steel shot with some pretty impressive looking loads among them. I then sent for a number of reloading manuals for expert instruction on reloading [ in general ] and also the reloading of steel shot as well as other ballistic information that would help me to reload this type of shot.I orded the components I would need to duplicate those loads and I have to say that I now enjoy hunting waterfowl as much as I ever did.
The reason for this addition to the site is to help those who might be interested in reloading steel shot and to help in choosing factory loads since the relationship between " PELLET AND PELLET ENERGY " , has for the most part , been blown way out of proportion. If I can help anyone in these areas I will be more than happy and willing to do so.

I was born in Placentia Bay. As a boy my dad always brought home a sea duck or two. As long as i can remember when the winter hit so did the sea ducks. Growing up around this I was hooked at an early age. Now, I'm walking in my father footsteps. I remember all the places he took me too, and all the good spots for the right shot. Up to this day we always talk about past times when he hunted with his father and now he is passing it on to me as I will with my son. There is one thing I love that's an early rise and the smell of gun powder.

Women in the Outdoors Administrator

I have lived in Mt Pearl my whole life and growing up I’ve spent a lot of my time in and around the great outdoors. I have always been taught to respect nature and everything it has to offer, whether it’s from the tiniest insect to the tallest tree and all the wildlife in between. My Parents had me cleaning rabbits as young as six years old and put a fishing pole in my hand since I was old enough to hold one. All my life I have enjoyed hearing old hunting and fishing stories that my family would tell and couldn’t wait until I could start telling my own. The woods and everything in it has become my passion and my life, that’s where I feel at home and that’s where my heart will always be. 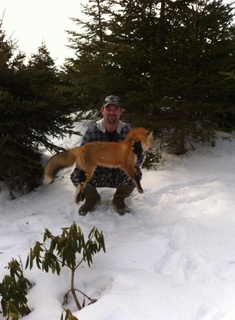 Hi, I'm John Turner was born in St. John's NL in 1976 and moved to St Lawerence in 1982. I lived there for 21 years. I then moved to Marystown. I love to hunt and trap the best thing about trapping is getting out on the hills and seeing all the wild life that's around us. So if you have any questions that I can help you with, please feel free to drop me a message. 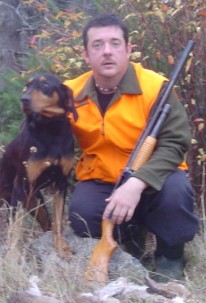 I have been a hunter, trapper, and a lover of the outdoors for over 25 years.

My first love is rabbit hunting.  But as I get wiser LOL (older), coyotes have now taken me to new places.  Hunting coyote, who by nature is a hunter, becomes a game of who can out think the other.  I hate to admit that they have won alot of times out there.

I still remember my first time in the woods hunting rabbits over dogs.  To this day I can't sleep the night before a rabbit hunt.  I have hunted with all kinds of dogs, from beagle to black and tan coonhounds.

I love the fact that I am now passing my knowledge to my oldest boy.  I hope to instill in him the joys of hunting and trapping that I feel.  I also hope to soon teach my two younger children.  They already can't wait to go in the woods with Dad hunting and trapping.