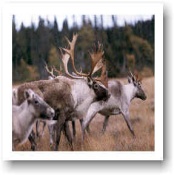 The Best Time to View Caribou?

My 6 yr old son is absolutely fascinated with wildlife and I want to keep the excitement going to hopefully encourage him to be a future hunting partner..lol. My question is...When is the best time…Continue

The Newfoundland and Labrador government has brought in tough restrictions on caribou hunting in light of a serious decline in the size of the George River herd in Labrador.A recently completed…Continue

Bears to blame for Nfld. caribou decline: ministerNewfoundland and Labrador's environment minister is rejecting calls to increase the bounty on coyotes, saying bears — not coyotes — are the primary…Continue

You need to be a member of Caribou Hunting to add comments!

Anyone going for a license on the island this year?

The co-author of a new study is calling for provincial action after the study revealed the population of woodland caribou in Newfoundland has dramatically decreased in the past decade.

The study for the Canadian Boreal Initiative reports that the count has dropped 66 per cent since the late 1990s with the population of caribou down to about 32,000.

John Jacobs, the president of Nature Newfoundland Labrador and co-author of the study, said it's time for the province to start protecting the animals.

"There is a lot of planning going on now regarding mining and minerals and forestry. And as this planning goes ahead, we're concerned that the idea of protecting the landscape for the caribou should be factored into this planning," said Jacobs.

The study reveals that the population decline is attributed to a combination of natural predators, hunting and human intrusion of the natural habitat of the caribou.

"What is new, though, is the magnitude of the human intrusion," Jacobs told CBC News.

Jacobs said the biggest factor in the decline is the increase of industrial activity on the natural habitat of the animal because of road construction, mining exploration and infrastructure for logging going up throughout the province.

Although the drop in numbers is alarming, Jacobs said now that the province is aware of the decrease, it should step up to lead Canada in responding to the declining population across the country.

Jacobs said it's about time the province recognizes the cultural and economic importance of the caribou, and recommends working towards an agreement that would see less activity in areas that are key to the continuity of the caribou.

"We're almost unique in this province in having such a large proportion of the lands being in public hands — being crown lands — so government and the public have a role to play in deciding how these lands are managed," said Jacobs.