Letter to the minister concerning Moose

The Association of Seafood Producers is calling for an end of the food fishery in light of declining cod stocks.

The ASP made the recommendation as part of its proposal to DFO’s management plan.

Despite the moratorium, the latest science shows that cod stocks have failed to recover from levels they were when the moratorium was imposed over 20 years ago.

Executive Director of the Seafood Producers, Derek Butler says others are on the same page. He says very little is…

In an effort to get more young people out hunting, Newfoundland and Labrador is lowering the minimum age for both small and big game licences.

The new age limits were announced Friday along with other changes to the Wildlife Act and regulations, including efforts to help those with disabilities have better access to hunting and angling.

NEW No Changes To Food Fishery This Year: McDonald

The federal government has decided to stay the course when it comes to this year’s food fishery, but licensing may be introduced next year.

MP Ken McDonald made the announcement this morning in Holyrood.

The federal government had been contemplating the introduction of a tags program for the recreational groundfish fishery, a notion that was widely condemned during a series of… Continue

Hi Folks,
I hope everyone is having a great weekend. The official start of summer. Please be safe this weekend, don't drink and drive, don't drink and ride. If you're out on the water be safe and wear a personal flotation device, it could save yours or a family members life. Enjoy and have a wonderful and safe weekend. 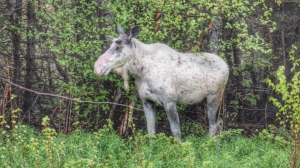 A large, mainly-white moose spotted recently on Newfoundland's west coast, has garnered the interest of photo buffs and the provincial wildlife department.

Wayne Barney, a species management coordinator with the Newfoundland and Labrador wildlife division, told the St. John's Morning Show Thursday that the male moose is not albino as many…

Two men from Wareham, Bonavista Bay are facing charges after allegedly shooting a moose on the Trans Canada in the middle of the night. Wildlife officers received numerous complaints last Friday night, September 11th, the night before the official start of the hunting season of possible night hunting along the TCH.

The recreational cod fishery will begin this weekend.

The summer food fishery will run from this Saturday until Sunday, August 9th and the fall fishery is scheduled for Sept. 19 to the 27th.

The personal limit is five fish per day, with a maximum boat limit of 15 groundfish.
DFO is asking participants to check their catches for pink or yellow tags located on the back of the fish. The tags are uniquely numbered and have a reward value ranging from $10-$100.

Two men on an ATV were stopped by Fish and Wildlife officers near the community last Tuesday, July 7th. Officers seized 13 untagged salmon, but not before the passenger of the vehicle tried to toss them away. The officers suspected that the driver of the ATV was impaired and called in RCMP who made an arrest.

Fish and Wildlife officers later found a net in nearby Windmill Bight Brook and set up surveillance in the area. Later that day the camera caught a man on an ATV…

Two people have been convicted and fined for illegal fishing and hunting activity thanks to the efforts of provincial Fish and Wildlife officers.

A Glenwood man was convicted after an investigation into illegal netting in the Salmon Pond area near Glenwood. He was fined $3,000 and is prohibited from being within 10 metres of inland waters for four years. He is also prohibited from holding any fishing licence for four…

Police said the pending charges under the Motorized Snow Vehicles/All-Terrain Vehicles Act relate to an incident on Wednesday night.

Officers encountered five young people, under the age of 16, who were riding dirt bikes within town boundaries without adult supervision.

A young woman from Lewisporte is desperately trying to find her missing beagle puppy she got after ending cancer treatments. Samantha Martin, 22, has battled a very tough form of cancer, neuroblastoma, which she was diagnosed with in 2011. Coping with the surgeries and chemo, Martin says she needed something to take comfort in, and decided to get a dog.

Martin says throughout her cancer she wanted something to look forward to and hold on to. She says to lose the dog already is…

Weather Sucks Again For the weekend

Residents of Central Newfoundland are being warned of black bears.

The department of Natural Resources says black bears have been reported in Gambo, Hare Bay, Indian Bay, Traytown, and Glovertown. Traps have been placed, and conservation officers were successful in relocating one bear from Traytown.

To avoid attracting bears to communities, residents are asked to ensure garbage is properly stored, and not put outside until collection day. If you come in contact with a…

Future court dates have been set for a case involving allegations of illegal dumping by Vale Newfoundland and Labrador. Lawyers appeared for status this morning at provincial court.

The company is facing three charges stemming from the alleged release of waste into Anaktalak Bay, near Voisey's Bay mine site in 2011. Vale has been charged with one count of unlawfully depositing a deleterious substance in water, one count of failing…

For motorists who use the Trans Canada Highway each day, its not an uncommon sight to see a moose or two, but this morning was an exception for one VOCM listener, who felt compelled to phone in a warning for other motorists.

The caller said that during a ride from Gander to Port Blandford this morning he saw 13 moose, many of them standing in the middle of the road.

But according to the RCMP, despite repeated warnings, many… 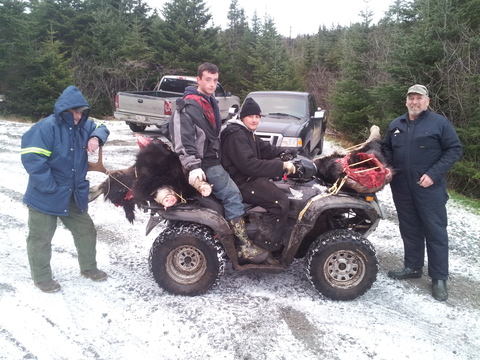 Good luck on Saturday. Hope everyone has a safe, successful and enjoyable hunting season.

Judge Robert Stack has dismissed the moose-vehicle collision class-action lawsuit against the Newfoundland and Labrador government, finding the province not liable.

The class-action lawsuit for people injured in moose-vehicle collisions that was filed against the provincial government has been dismissed by a judge with the Supreme Court of Newfoundland and Labrador.